A sustainable philosophy is present at Meliá Hotels International. The emblematic Meliá Paulista – a long time reference in the hotel industry in Sao Paulo – launches an exclusive Hypoallergenic Green Floor.

The Green Floor Hypoallergenic apartments, created in partnership with WWF Brazil, aim to combine sustainability with the well-being of its visitors. The rooms have tiled and carpeted options, all natural amenities, a pillow menu, bubble bath, exclusive aromatization, ambient sound reminiscent of the sounds of nature and selective garbage collection to maximize recycling. All the paper products used in the apartments are made with recyclable materials.

All 19 apartments Green Floor Hypoallergenic rely on the application of SD-Pro – a product that eliminates bacteria, fungi, and microorganisms, imported by RCR Rinaldi – offering guests an environment free of microbial activity with a chemical that is not harmful to the environment. SD Pro is registered as a long-term disinfectant by ANVISA. SD Pro is a treated article under US EPA FIFRA regulations.

Follow this link to the Melia Green Floor Site: https://www.melia.com/en/hotels/brazil/sao-paulo/melia-paulista/green-floor-queen.htm 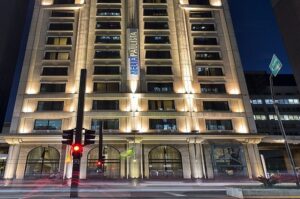 The Meliá Paulista Hotel, located on Avenida Paulista in São Paulo, one of the main arteries in Latin America and one of the most cosmopolitan avenues of the world, obtained a Certificate of Excellence from Trip Adviser in 2016 and also Booking 2014, 2015 and 2016; Excellent Award 2016 by Decolar.com; And 2016 Silver and Bronze EcoLíder TripAdvisor, Meliá Paulista – who also won the 2016 Top Choice Award and  was nominated by Michelin Guide São Paulo and Rio de Janeiro in the years 2015, 2016 and 2017.

The hotel has 400 apartments and sophisticated suites, as well as the contemporary Gran Vía restaurant, lobby bar, reading room, fitness, and parking. The hotel also offers 7 meeting rooms and 3 halls for events and conventions for up to 300 people.

Meliá Paulista is in the front of Consolacáo Station, Parque Trianon, São Paulo Museum of Art (MASP) and other cultural centers and theaters. It is also within a few blocks of the best national and international designer stores and is 10 km from Congohas Airport and 31 km from Guarulhos Airport. Another advantage of staying at Meliá Paulista is that it is close to several consulates, such as South Africa, Albania, Argentina, Belgium, Bolivia, Chile, South Korea, France, India, Italy, Japan, Jordan, Lebanon, Luxembourg, Monaco, the Dominican Republic, Syria, Switzerland, and Taiwan.